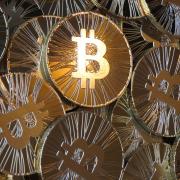 The myriad voices publicly explaining, debating, arguing, sniping, and prognosticating about the future of the new digital “cryptocurrency”  Bitcoin, propelled the virtual currency to a top spot among the hottest news topics of 2013, with little sign of cooling off.

Its advocates describe Bitcoin as the future of money, populist banking, decentralized trust, and the currency of social revolution that will enable global collaboration on an unprecedented scale.

Critics decry it as play money in a virtual casino, an intellectual sinkhole, a speculative hyper-bubble, and opportunism and adolescent fantasies of a crypto-powered stateless future.

Bitcoin basics
Developed in 2008 and released in early 2009 by an individual or group of individuals known by the pseudonym Satoshi Nakamoto,  Bitcoin  an encrypted digital currency that enables direct, peer-to-peer financial exchanges, with no central bank or other financial intermediary processing and tracking transactions, manipulating its value, or issuing new bitcoins.

The new money system works through sophisticated software that records and verifies online exchanges in a continuously updating electronic ledger called a blockchain.  The open-source blockchain file contains a record of every Bitcoin transaction ever made, and is accessible by any participant in the Bitcoin network to examine, test, and rework.

Bitcoins themselves are simply bits of computer code exchanged online. They aren’t printed or minted in the way we traditionally think of currency. (The one pictured above is a representation of the Bitcoin logo.) Bitcoin has also spawned dozens of other cryptocurrencies  built off the original algorithm.

Creating a Bitcoin account generates an address, which contains a matched pair of keys, one public, the other private (kept secret, like a password). Users’ private keys are generally stored in a virtual wallet.

Many online vendors and service providers take bitcoin in lieu of cash or credit, as well as a rapidly growing number of bricks-and-mortar retailers and street vendors.

To spend bitcoins, an account holder “signs” with his or her private key, which remains private, but the coin it’s attached to and the corresponding public key becomes part of the blockchain ledger.

New bitcoins are created by the same process that confirms and validates the transactions. Participants in the network “mine” new bitcoins by competing to solve the increasingly complex computer problems needed to verify the transactions and maintain the public ledger. Successful miners get paid for their work in either bitcoins or transaction fees.

Users can also acquire bitcoins by earning them through real-world business transactions, or by buying them with cash in an ever-increasing number of Bitcoin exchanges and ATMs.

“As a currency Bitcoin will derive its value as it can be exchanged for goods and services, says Steve Judd, Information Technology & Distance Education manager for the University of New Hampshire Cooperative Extension, and chair of eXtension’s network literacy resource area. The wild fluctuation in the exchange rate for bitcoin vis-a-vis the dollar is indicative that its value can’t yet be reliably established.”

Evangelists
The most passionate advocates portray Bitcoin as a disruptive technology that has already begun and will continue to disrupt the global financial framework. Theoretically, the new system empowers anyone with an internet connection to set up a business, earn, spend, borrow, transfer, or save money without regard for national boundaries and without the intermediary of banks or profit-seeking middlemen who take a cut of every financial transaction.

Among the best-known Bitcoin evangelists, Andreas Antonopoulos says the disruptions will reach far beyond virtual currencies’ use as “digital cash”. He predicts that Bitcoin’s underlying algorithm will expand to find wide use transforming economics, politics, law, and resource distribution.

Furthermore, they say that Bitcoin’s relative anonymity and resistance to regulatory oversight and law enforcement will, and already has created opportunities for fraud, theft, money laundering, insider trading and other criminal activities. Some believe it poses an “existential threat to the liberal state”  that could jeopardize social welfare programs, transportation infrastructure, public education, and research currently funded primarily by government taxation.

Jerry Buchko, a personal-finance counselor, coach, and tutor, and a member of the eXtension Network Literacy community of practice, weighs in with the skeptics. “Bitcoin and decentralized digital currencies have the potential to challenge the established players, but I don’t see anything changing the game with regard to its social impact.

“The critical component in the system isn’t the technology, it’s the users and how they chose to use it,” Buchko says. “As far as enabling social revolution, other societies make different economic choices and produce different outcomes for themselves than we have here, and they’ve done it without having to invent a new currency technology.

“Without a culture change, I don’t see how we would end up with anything but more of what we have now.

Ultimately, the naysayers say the system is unsustainable and eventually will need robust regulation and law enforcement to prevent fraud. (A Bitcoin industry group, the Digital Asset Transfer Authority, has already formed to “build risk management and compliance programs” that meet the standards of policymakers and financial regulators.)

The cautious middle
A cautious middle position holds that even if Bitcoin or a future generation of virtual currency doesn’t come to dominate global finance, if it becomes widely used and respected, it would exert tremendous pressure on traditional banks and other financial services to keep costs low to remain competitive. Outgoing Federal Reserve chairman Ben Bernanke falls into this group, noting that Bitcoin, “may hold long-term promise, particularly if the innovations promote a faster, more secure, and more efficient payment system.

Judd says,“I’d say I fall in this middle position. While I wouldn’t wager that Bitcoin will become a dominant or even mainstream form of currency, it will impact how we think of currency and force the current financial players to guard their flanks.

“In the U.S., we don’t worry much about our currency, but in other nations (e.g., Cyprus, Spain, African nations) the impetus for a currency not linked to the local government could be a compelling reason to adopt it. Bitcoin may be like the Newton –ahead of its time, but influential for the ideas it spawns.”

Articles with a point of view