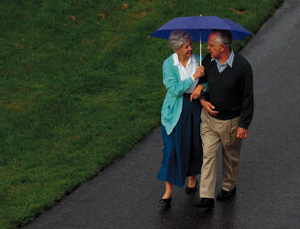 One of the major concerns of retirees, in addition to the cost of health care in later life, is a fear of outliving their savings. A retiree’s money will last longer when assets are withdrawn in a tax-efficient manner. What does this mean? Tax-efficiency refers to the best possible sequence to withdraw money from saving and investment accounts so that income taxes are minimized and accumulated assets last as long as possible.

The order in which withdrawals are made is the key to tax efficiency:

• Generally, this means tapping taxable accounts (i.e., investments other than IRAs and tax-deferred employer plans such as 401(k)s) first, since they were made with after-tax dollars and taxes have already been paid on investment earnings. In addition, these investments often contain long-term capital gains, which are taxed at a lower tax rate than tax-deferred assets, which are taxed as “ordinary income” (i.e., at whatever marginal tax bracket a taxpayer is in).

• Another good initial source of money, for initial retirement asset withdrawals, is tax-free assets, such as municipal bonds or bond funds, where no tax is due.

• If possible, retirees should wait until age 70½ to tap their tax-deferred accounts. This is the age when required minimum distributions (RMDs) must be made from most retirement accounts (exception: Roth IRAs, where withdrawals are tax-free if certain qualifications are met).

• If tax-deferred money is needed before age 70½, first tap tax-deferred accounts that were made with after-tax dollar contributions, such as fixed or variable annuities and non-deductible Traditional IRAs. Then tap before-tax dollar savings (i.e., money in retirement savings accounts that was not previously taxed before it was deposited), such as deductible traditional IRAs and 401(k) plans, if needed.

• Withdrawals from Roth IRAs should be made last because they have no minimum withdrawal age and earnings grow tax-free. Also, if Roth IRA money is not spent during a person’s lifetime, it can be bequeathed to his or her heirs.

Studies where different investment withdrawal scenarios are modeled with computers have found that a retirement nest egg can generally last two to five years longer than it otherwise would have by withdrawing money from taxable accounts before tax-deferred (retirement) accounts. The exact length of time depends on factors such as the amount of money invested and a retiree’s marginal tax bracket. There are exceptions to this, however, such as when someone has substantial unrealized capital gains on assets held in taxable accounts. In this situation, it might be better to liquidate retirement accounts first and hold taxable accounts for charitable gifting or for transfers to heirs at a stepped up basis upon death. Assistance from a professional financial advisor is recommended in these cases where accumulated assets are substantial.

For most people, however, the order of withdrawal described above is the most tax-efficient. A study by the investment firm T. Rowe Price compared three retirement withdrawal scenarios: 1. withdrawals from an IRA first, 2. withdrawals from a taxable account first, and 3. conversion of a traditional IRA to a Roth IRA prior to making withdrawals (note: this requires payment of income taxes for the year of the conversion in exchange for tax-free Roth IRA withdrawals at a later date). Their analysis assumed a 62-year old investor with $600,000 in savings divided equally between a traditional IRA and a taxable account, both earning 9%.

The table, below, shows how long assets would last with each withdrawal method. Note that the optimal method is to convert a traditional IRA to a Roth IRA as well as to liquidate taxable savings first.

Impact of Withdrawal Method Upon Length of Retirement Income

Another way to stretch retirement savings is to work, full or part-time, after retirement. Semi-retirement (e.g., working 2 or 3 days a week while collecting Social Security and/or a pension) with a new employer, a home-based business, or other type of freelance work are common catch-up strategies. In addition to providing income, work after retirement can provide a sense of fulfillment, social contact, and daily routine. The major financial benefit of semi-retirement, however, is that it reduces the amount of money that must be withdrawn from investments to supplement retirees’ Social Security and/or a pension. This has the effect of stretching retirement assets, which is a tremendous advantage for savers who are retiring with limited funds.

A disadvantage of working after retirement is the Social Security earnings limit for beneficiaries age 62 to Full Retirement Age. The 2013 earnings limit is $15,120, with a $1 reduction in benefits for every $2 earned over this amount. In addition, there are tax consequences: taxation of up to 50% or 85% of Social Security benefits at certain levels of household income for single and joint tax filers.

Even with the earnings limit and taxes, working longer is a very effective way to stretch retirement assets. An example of how income from a post-retirement job can make your money last longer is two people with $100,000 of savings who need $10,000 annually to supplement their pension and/or Social Security. A non-working retiree withdraws $10,000 annually for as long as the money lasts and is in danger of outliving his or her assets. A $10,000 withdrawal is 10% of the $100,000 nest egg. According to Fidelity Investments Retirement Service Group, if retirees withdraw 10% of an investment portfolio and earn an average return of 6%, their money will last approximately 12 years.

Another retiree withdraws $4,000 (4%) and earns the remaining $6,000 from a part-time job. In this case, the $4,000 withdrawal is 4% of the $100,000 nest egg. According to the Fidelity source, noted above, if retirees withdraw 4% of an investment portfolio and earn an average return of 6%, their money will last approximately 34 years. This number, as well as the one above, is an estimate of portfolio longevity based on the relationship between the payout percentage and the investment return. More sophisticated analyses can also be done using historical investment performance data for an investor’s portfolio asset allocation and computer-based tools such as Monte Carlo analyses.

Research studies indicate that retirees with stock in their portfolio should withdraw no more than 4% to 4.5% of their savings annually to avoid outliving their assets. Conservative investors should withdraw even less, say 2.5 to 3% of their portfolio balance. In the above scenario, the amount withdrawn by the second retiree was within the generally recommended limit while the drawdown of the first retiree far exceeded it. Unfortunately, many people are not aware of the research-based 4% withdrawal guideline. In June 2008, the MetLife Mature Market Institute reported results of a survey where seven in ten (69%) of 1,216 pre-retirees aged 56-65 overestimated how much they can draw down from their savings. Even worse, an alarming 43% thought they could withdraw 10% or more of their assets each year while still preserving their principal.

Want to make you money last in retirement? Make prudent (i.e., less than 4% to 4.5% of the total of invested assets) and tax-efficient (i.e., withdrawals from taxable accounts first) asset withdrawals.